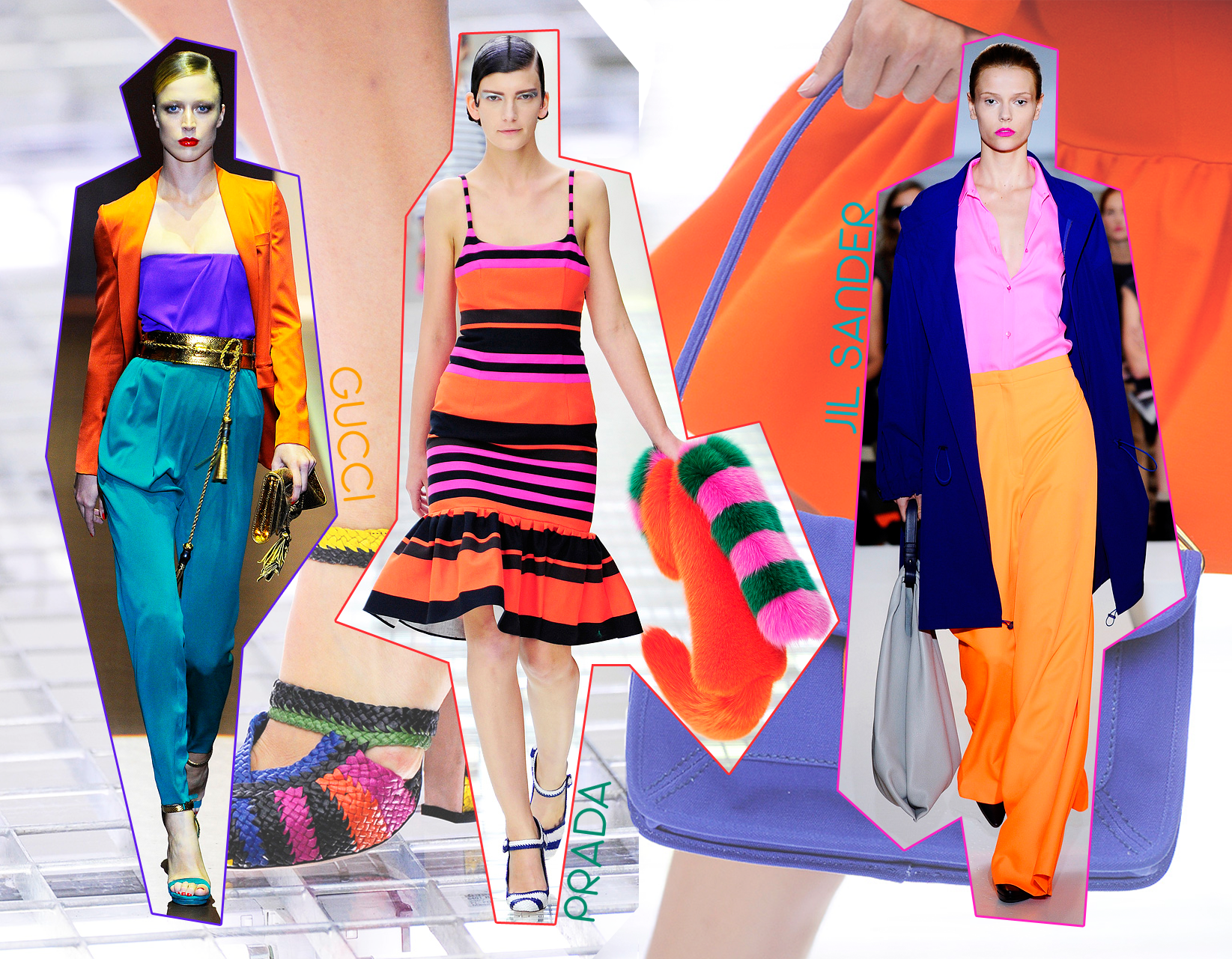 I'm completely and utterly stoked about the bright and bold colors trend for spring and summer 2011 going mainstream because I love it when city streets are infused with colors.

When I was in Zara stores in Milan and Paris during fashion week, checking how they'd styled the mannequins, I saw looks consisting solely of bright pieces for the first time ever (I was born too late to have witnessed the events of the 1980s and geniously revolting aerobic outfits firsthand). Grass-green pants, fuchsia shirt, ultramarine blue blazer.

I never imagined an insane ensemble like this could look so awesome.

I paused in deep thought amidst ardent shoppers rushing from one end of the store to the fitting rooms and back (at Zara there's always that one more thing you have to try on): "This is a revolution!"

Paris didn't quite catch up on the trend, but Milan streets were full of Prada, full of Jil Sander. It was as if someone had declared a "Dress like Anna Dello Russo" week and the participants cultivated the most colorful eccentricity. They looked like Zara mannequins, only a bajillion times more expensive.

(Of course, as you can see in my report from the Emporio Armani F/W 11/12 show, Anna Dello Russo was the uncrowned queen of bright and bold fashion week outfits. Someone really should give her that crown though. Why else do you think she's wearing fruits on her head if not to compensate?)

Imagine my disappointment when days later I went to Zara in Ljubljana and discovered it's having only a fraction of Milan's exploding colors party? The mannequins are shyly clad in one, maximum two bright pieces at once. The rest of the look is neutrals.

It's nothing compared to the vibrant, brilliantly bold clothes that had me so excited in Milan and Paris, so excited I'm still thinking about them two weeks later.

The looks also entirely lack energy, as if there isn't a single person in this city who could wake up one morning fashion-starved and scream at the top of her lungs, "I want to be Anna Dello Russo today!"

Anna Dello Russo would probably cry at the sight of it. Remembering Milan, I almost did too.

It was then that I realized I'm sick of Ljubljana having the reputation of not being really fashion-forward when this impression is often a result of what someone else has selected for us.

This website uses cookies to improve your experience while you navigate through the website. Out of these, the cookies that are categorized as necessary are stored on your browser as they are essential for the working of basic functionalities of the website. We also use third-party cookies that help us analyze and understand how you use this website. These cookies will be stored in your browser only with your consent. You also have the option to opt-out of these cookies. But opting out of some of these cookies may affect your browsing experience.
Necessary Always Enabled
Necessary cookies are absolutely essential for the website to function properly. These cookies ensure basic functionalities and security features of the website, anonymously.
Functional
Functional cookies help to perform certain functionalities like sharing the content of the website on social media platforms, collect feedbacks, and other third-party features.
Performance
Performance cookies are used to understand and analyze the key performance indexes of the website which helps in delivering a better user experience for the visitors.
Analytics
Analytical cookies are used to understand how visitors interact with the website. These cookies help provide information on metrics the number of visitors, bounce rate, traffic source, etc.
Advertisement
Advertisement cookies are used to provide visitors with relevant ads and marketing campaigns. These cookies track visitors across websites and collect information to provide customized ads.
Others
Other uncategorized cookies are those that are being analyzed and have not been classified into a category as yet.
SAVE & ACCEPT
Total
29
Share
0
0
1
0
28
0