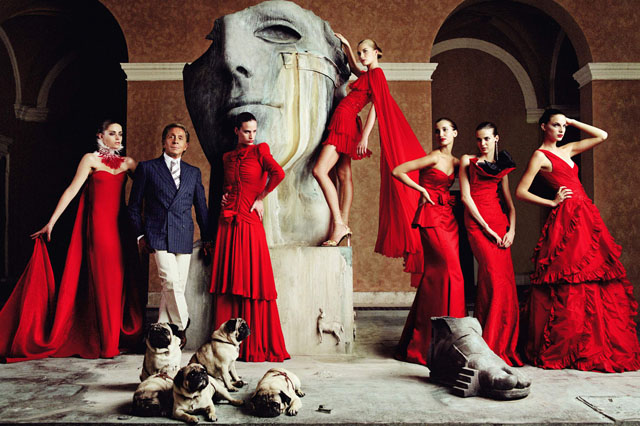 A freezing winter morning is the best time to have an exhibition to yourself. Crossing the strangely quiet and empty Somerset House courtyard (how lost it looks without the frenzy of fashion week …), I entered a maze leading to the river side of the building where they had hid the Valentino: Master of Couture exhibition as the first visitor of the day.

The exhibition displays 130 of Valentino's haute couture looks worn by the likes of Audrey Hepburn and Jacqueline Kennedy, celebrating his 50 years in fashion. The first room introduces you to the glamorous world of the capital V with a collection of photos, invitations to haute couture shows, correspondences between Valentino and other notable fashion people (a rare chance to see Anna Wintour's handwriting), and his sketches.

Design duo Kinmonth Monfreda transformed the second room with the haute couture looks into a fashion show. Valentino-clad mannequins are dispersed among three rows of seats on each side while you walk up and down the catwalk. In a brilliant role reversal, you become a "model" looking at couture worn by the "audience". 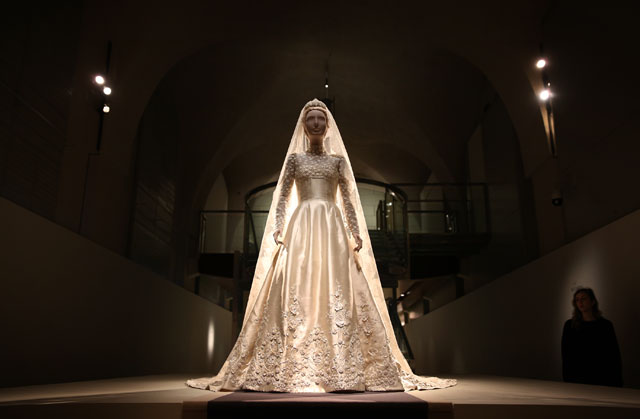 Although I recognised the catwalk in the second room immediately, the sheer quantity of dresses made me feel like I crashed a Hollywood awards ceremony. Everything sparkled: rhinestones, embroideries, beadings and sequins, the absence of which usually makes people wonder if the garment can still be considered haute couture (it can). Of course, my association is perfectly justified: Valentino has been a red carpet favourite longer than I've been alive.

In the third room you'll find Princess Marie Chantal of Greece's spectacular pearl-encrusted ivory silk wedding gown with a four and a half metre train and 12 kinds of lace, made in 1995 by 25 of Valentino's seamstresses. 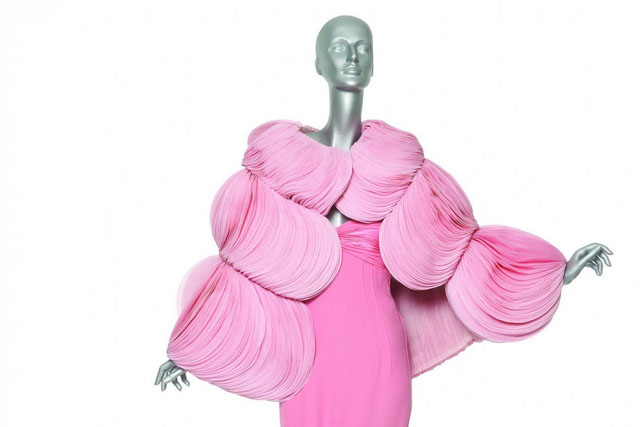 At the very end of the exhibition is a display of haute couture techniques, some of which are unique to Italian couture or even the Valentino atelier (e.g. the "Pagine" technique, where disks of organza silk are piled to create an effect of pages, like in a book). Haute couture is (deliberately) kept a myth, too beautiful and expensive for commoners, but the exhibition gives insight into the process with videos of Valentino seamstresses doing their magic. Needle, thread, scissors, pins, and fabric – it can't be that simple, can it? Recalling the second room's intricate, lavishly extravagant dresses, Valentino's haute couture seems almost like sorcery.

Photos from the exhibition's press material.

This website uses cookies to improve your experience while you navigate through the website. Out of these, the cookies that are categorized as necessary are stored on your browser as they are essential for the working of basic functionalities of the website. We also use third-party cookies that help us analyze and understand how you use this website. These cookies will be stored in your browser only with your consent. You also have the option to opt-out of these cookies. But opting out of some of these cookies may affect your browsing experience.
Necessary Always Enabled
Necessary cookies are absolutely essential for the website to function properly. These cookies ensure basic functionalities and security features of the website, anonymously.
Functional
Functional cookies help to perform certain functionalities like sharing the content of the website on social media platforms, collect feedbacks, and other third-party features.
Performance
Performance cookies are used to understand and analyze the key performance indexes of the website which helps in delivering a better user experience for the visitors.
Analytics
Analytical cookies are used to understand how visitors interact with the website. These cookies help provide information on metrics the number of visitors, bounce rate, traffic source, etc.
Advertisement
Advertisement cookies are used to provide visitors with relevant ads and marketing campaigns. These cookies track visitors across websites and collect information to provide customized ads.
Others
Other uncategorized cookies are those that are being analyzed and have not been classified into a category as yet.
SAVE & ACCEPT
Total
44
Share
0
0
22
0
22
0