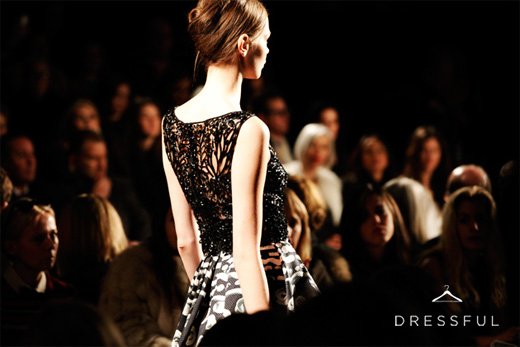 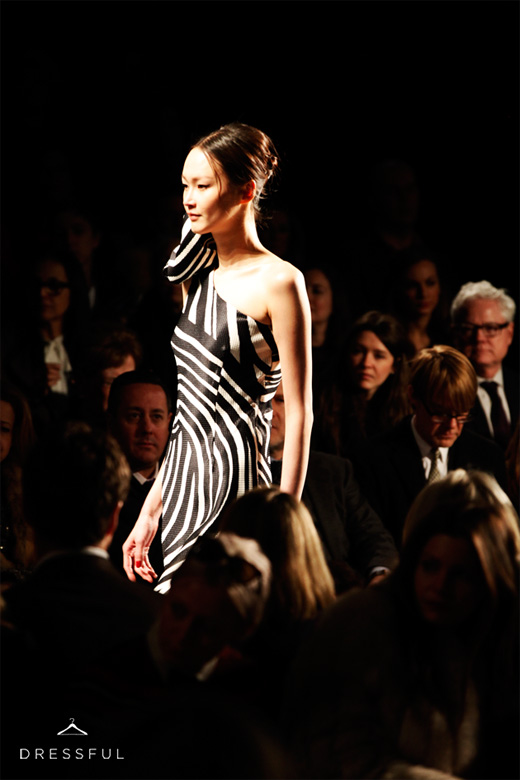 Naeem Khan's Fall 2012 collection is inspired by the decadence and dust of India. The wind shed dust along the way, leaving us only with black, gold, silver and white decadence. Runway lights bounced off body-hugging dresses embellished with glass mirror pieces. One-shoulder frocks with big bows balanced film star glamour with frolic. Like Reem Acra's Fall 2012 collection, this one too was made with exclusive occasions in mind. 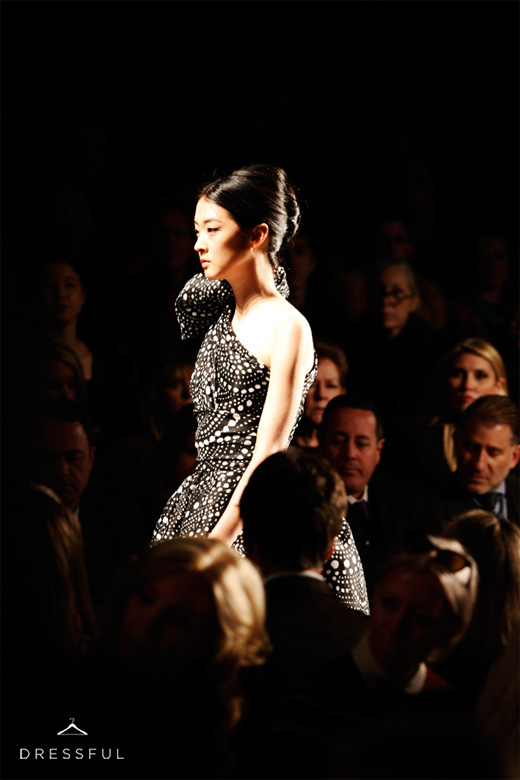 The Indian inspirations (most notably paisley patterns and tilakas - Khan said in a recent interview that designing the collection began with a single dot) were translated to garments through several ancient artistic techniques used on bodies and textiles. I think preserving old techniques in an age when modern techniques have taken over is tremendously important because it ensures that these branches of fashion, as well as people's knowledge and skills, won't go extinct. When they get recognized globally, at a major fashion week, so much better.

Naeem Khan was the first show at New York Fashion Week, not only this season but in general, where I had a seat, so I was very excited to snap photos of it: 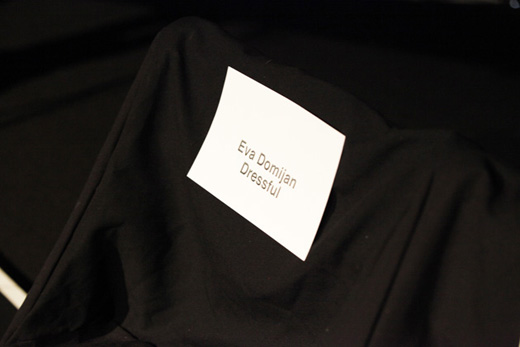 I declared this the best possible Valentine's Day gift.

This website uses cookies to improve your experience while you navigate through the website. Out of these, the cookies that are categorized as necessary are stored on your browser as they are essential for the working of basic functionalities of the website. We also use third-party cookies that help us analyze and understand how you use this website. These cookies will be stored in your browser only with your consent. You also have the option to opt-out of these cookies. But opting out of some of these cookies may affect your browsing experience.
Necessary Always Enabled
Necessary cookies are absolutely essential for the website to function properly. These cookies ensure basic functionalities and security features of the website, anonymously.
Functional
Functional cookies help to perform certain functionalities like sharing the content of the website on social media platforms, collect feedbacks, and other third-party features.
Performance
Performance cookies are used to understand and analyze the key performance indexes of the website which helps in delivering a better user experience for the visitors.
Analytics
Analytical cookies are used to understand how visitors interact with the website. These cookies help provide information on metrics the number of visitors, bounce rate, traffic source, etc.
Advertisement
Advertisement cookies are used to provide visitors with relevant ads and marketing campaigns. These cookies track visitors across websites and collect information to provide customized ads.
Others
Other uncategorized cookies are those that are being analyzed and have not been classified into a category as yet.
SAVE & ACCEPT
Total
3
Share
0
0
2
0
1
0