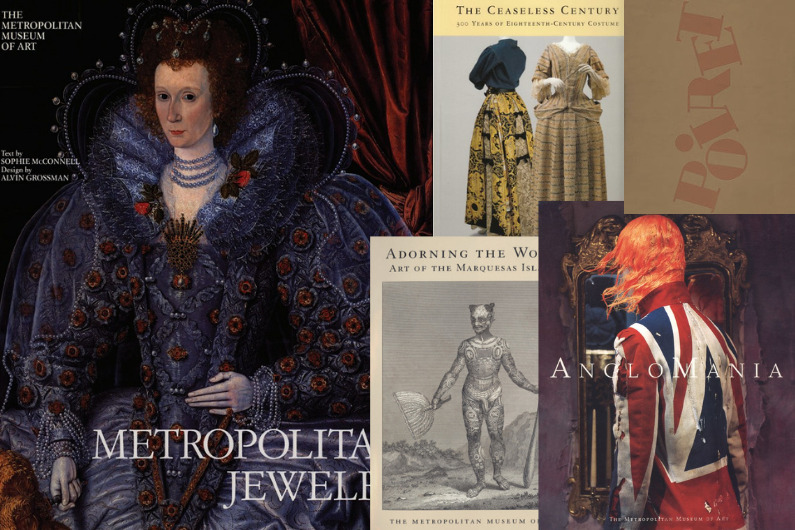 Looking for something new to read? Check out these fashion books in pdf from The Metropolitan Museum of Art. Whether you love fashion or just interested in learning more about trends and fashion history, these books are sure to please. Best of all, they're absolutely free to download!

1. AngloMania: Tradition and Transgression in British Fashion by Andrew Bolton

Anglomania: Tradition and Transgression in British Fashion examines the Anglo-Saxon influence on fashion from the early 1800s to the present day. The book looks at how British fashion has been both a source of inspiration and imitation for other cultures, and how it has sometimes been reviled as overly conservative or excessively eccentric.

It also explores the ways in which British designers have appropriated and reinterpreted traditional clothing, often with subversive or humorous intent.

Anglomania is lavishly illustrated with over 200 images, including paintings, photographs, and fashion plates. This puts it among the best available fashion books in pdf. It will be essential reading for anyone interested in the Anglo-Saxon influence on global culture.

Harold Koda and Andrew Bolton's Poiret is a comprehensive look at the life and work of French fashion designer Paul Poiret. Poiret was one of the most influential designers of the early 20th century, and his designs helped to shape the modern conception of fashion.

The book traces Poiret's career from his humble beginnings as a milliner's assistant to his rise to prominence as a fashion designer. It includes a wealth of illustrations and photographs of Poiret's work, as well as a detailed analysis of his design philosophy. Koda and Bolton's book is an essential resource for anyone interested in the history of fashion.

The Ceaseless Century: Three Hundred Years of Eighteenth-Century Costume by Richard Martin is a fascinating look at the fashion and style of the 1700s. The book is divided into three sections, each covering a different period of the century.

The final section looks at the late part of the century, when fashion was again influenced by the French court.

Throughout the book, Martin includes many illustrations of eighteenth-century clothing, as well as photographs of contemporary reenactors wearing the same styles of clothing. The Ceaseless Century is an excellent resource for anyone interested in the history of fashion.

4. Two by Two by Richard Martin and Harold Koda

In Two by Two, the authors examine the prevalence of pairs in fashion history. They look at how designers have often created pairs of garments - such as two different but coordinating outfits - as a way to show off their skills and creativity.

They also discuss how pairs of garments can be used to make a statement about the wearer's status or identity. Ultimately, the authors argue that pairs of clothing can be seen as a reflection of our need for companionship and our desire to belong.

5. Adorning the World: Art of the Marquesas Islands by Eric Kjellgren with Carol S. Ivory

The Marquesas Islands are home to a unique and beautiful culture, with a rich history of art and fashion. The book Adorning the World: Art of the Marquesas Islands explores the islanders' unique style of dress and adornment, and features a stunning collection of photographs of Marquesan art and artifacts. One of the most unexpected fashion books in pdf for sure!

The Marquesas have a long history of art and fashion, dating back to the early days of their settlement. The islanders have always been known for their colorful and intricate clothing, which is often adorned with elaborate patterns and designs.

Marquesan dress is also unique in that it is often made from a variety of different materials, including bark cloth, feathers, and shells.

The Marquesans are also known for their beautiful body art, which is often used to decorate their clothing. Body painting and tattooing are an important part of Marquesan culture, and many islanders sport elaborate designs on their faces, chests, and arms.

Sophie McConnell's Metropolitan Jewelry is a collection of essays on the history and meaning of jewelry belonging to The Metropolitan Museum of Art's collection. It covers a wide range of topics, from the ancient world to the modern day.

McConnell explores the different ways jewelry has been used throughout history, and how it has come to mean different things to different people.

The author also looks at the ways in which jewelry has been made, and how it is currently being made. This book is a fascinating read for anyone interested in jewelry, or in the history and meaning of jewelry.

The Metropolitan Museum of Art has a wealth of fashion books in pdf available for anyone interested in learning more about this subject. These books cover a wide range of topics, from the history of fashion to contemporary design trends.

Want more? Check out my post with 20 free fashion books. Whether you're a fashion enthusiast or an expert, there's something here for everyone.

This website uses cookies to improve your experience while you navigate through the website. Out of these, the cookies that are categorized as necessary are stored on your browser as they are essential for the working of basic functionalities of the website. We also use third-party cookies that help us analyze and understand how you use this website. These cookies will be stored in your browser only with your consent. You also have the option to opt-out of these cookies. But opting out of some of these cookies may affect your browsing experience.
Necessary Always Enabled
Necessary cookies are absolutely essential for the website to function properly. These cookies ensure basic functionalities and security features of the website, anonymously.
Functional
Functional cookies help to perform certain functionalities like sharing the content of the website on social media platforms, collect feedbacks, and other third-party features.
Performance
Performance cookies are used to understand and analyze the key performance indexes of the website which helps in delivering a better user experience for the visitors.
Analytics
Analytical cookies are used to understand how visitors interact with the website. These cookies help provide information on metrics the number of visitors, bounce rate, traffic source, etc.
Advertisement
Advertisement cookies are used to provide visitors with relevant ads and marketing campaigns. These cookies track visitors across websites and collect information to provide customized ads.
Others
Other uncategorized cookies are those that are being analyzed and have not been classified into a category as yet.
SAVE & ACCEPT
Total
0
Share
0
0
0
0
0
0