The Belle de jour inspiration was largely unrecognisable because the intricate pieces full of contrasts and a cantata playing in the background suggested something else: baroque. The show opened with short white dresses decorated with large, sharp abstract black prints, evoking the Spanish Inquisition. There were wide black chokers, stern jackets with oversized lapels, and folds creating unexpected shapes (from the back, they looked like small wings). 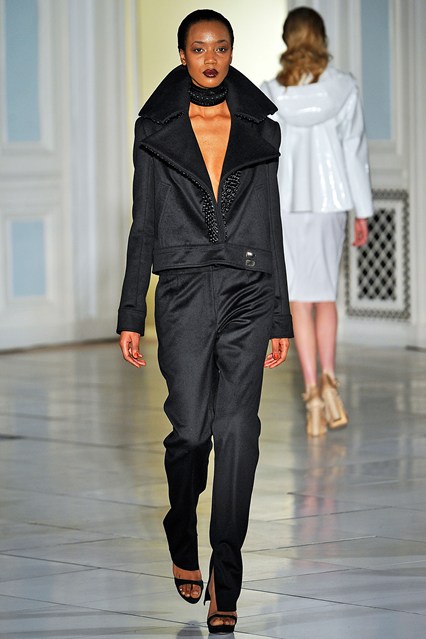 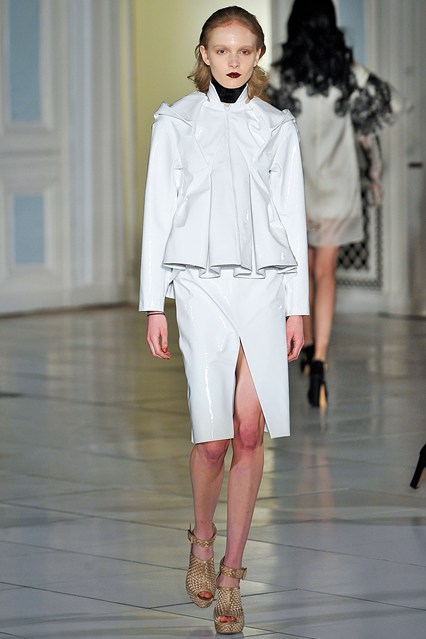 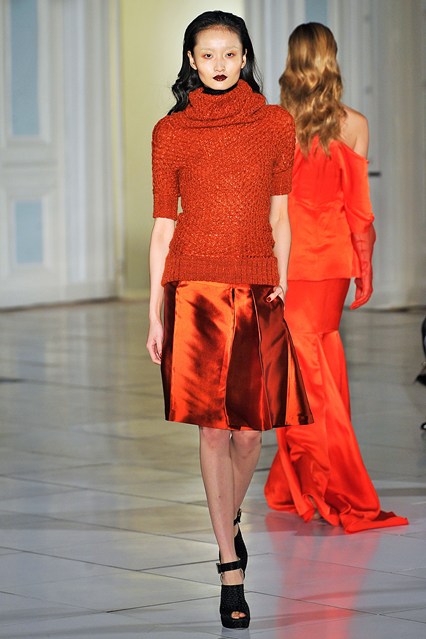 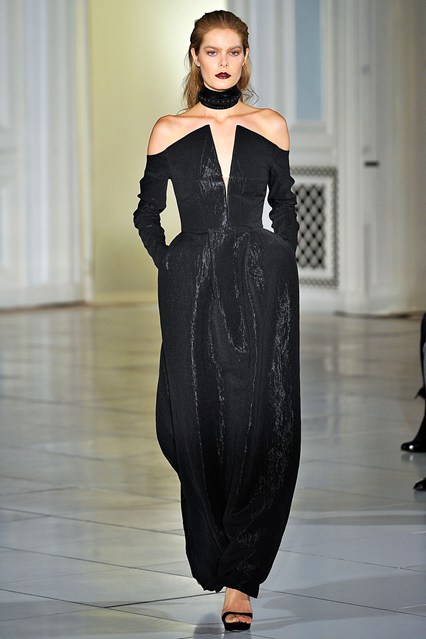 The collection vacillated between eveningwear and no-nonsense daytime pieces. However, sleek gowns exposing the shoulders told a different story than simple knitwear in burnt-orange.

Everyone in the audience whipped out their phones at the sight of a large round mask covering the model's whole face – a nod to Fyodor Golan's Spring/Summer 2013 collection, which featured large architectural hats by milliner Zara Gorman. The headdress felt slightly out of place in this show, but made for a great Instagram moment.

Though the collection lacked cohesion, I appreciate that Fyodor Golan is emerging with its own identity instead of knocking off Nicolas Ghesquière's Balenciaga, which seems to be all the rage wherever you look these days.

P.S. The show I had been looking forward to the most yesterday was Jean-Pierre Braganza, one of my favourite young London designers. After queuing for half an hour, they turned about 70 people away because the venue had reached full capacity, though we had invitations. The same thing happened this morning at the Clements Ribeiro show, so unfortunately I'll be unable to publish as many show reviews as I had intended.

This website uses cookies to improve your experience while you navigate through the website. Out of these, the cookies that are categorized as necessary are stored on your browser as they are essential for the working of basic functionalities of the website. We also use third-party cookies that help us analyze and understand how you use this website. These cookies will be stored in your browser only with your consent. You also have the option to opt-out of these cookies. But opting out of some of these cookies may affect your browsing experience.
Necessary Always Enabled
Necessary cookies are absolutely essential for the website to function properly. These cookies ensure basic functionalities and security features of the website, anonymously.
Functional
Functional cookies help to perform certain functionalities like sharing the content of the website on social media platforms, collect feedbacks, and other third-party features.
Performance
Performance cookies are used to understand and analyze the key performance indexes of the website which helps in delivering a better user experience for the visitors.
Analytics
Analytical cookies are used to understand how visitors interact with the website. These cookies help provide information on metrics the number of visitors, bounce rate, traffic source, etc.
Advertisement
Advertisement cookies are used to provide visitors with relevant ads and marketing campaigns. These cookies track visitors across websites and collect information to provide customized ads.
Others
Other uncategorized cookies are those that are being analyzed and have not been classified into a category as yet.
SAVE & ACCEPT
Total
11
Share
0
0
2
0
9
0