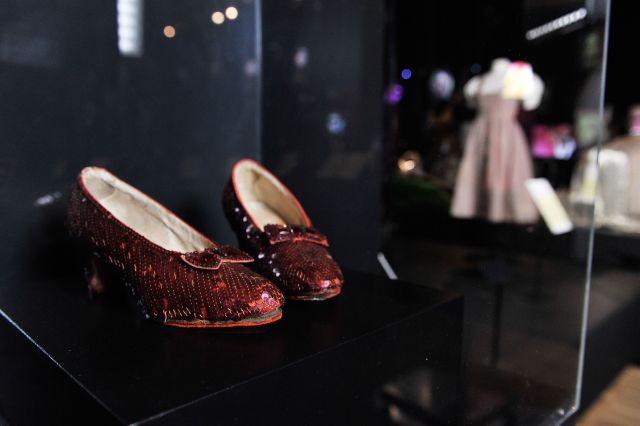 Yesterday I and hundreds of other people visited the newly opened Hollywood Costume exhibition in the Victoria and Albert Museum. As per the press release, the exhibition brings together over 100 of the most iconic movie costumes from classical and contemporary Hollywood.

The exhibition space is divided into three dimly lit galleries with famous film scores playing in the background. Walking through feels like watching a film in the cinema, except this time the main characters are clothes.

I liked the innovative use of cinemagraphs to display characters' faces behind or above the costumes. These moving pictures give you a chance to recall the character in your mind, making the costume in front of you seem more alive.

There's one more thing you should know: the exhibition is as complete and comprehensive as it gets. I couldn't think of one memorable Hollywood costume that isn't there.

Better yet, it reminded me of some I had forgotten.

The section with costumes of women in royal courts. Opulence, ruff collars, massive ornate headgear and crinolines – these characters had clearly luxuriated in many fashion showers.

If you don't fancy looking at clothes over people's shoulders, wait another week to see the exhibition. The place was bursting at the seams (pun intended). You have to be constantly moving in the queue, which leaves you with approximately two seconds viewing time per dress. The queue? Of course there's a queue inside the exhibition, this is Britain.

Dorothy shoes (All photos from the V&A)

Ruby sequin slippers from The Wizard of Oz. Since Dorothy appears on the poster for Hollywood Costume, you'd think her shoes would be the focal point of the exhibition akin to the Louvre's Mona Lisa. Au contraire, find them in the last gallery near the exit.

The exhibition is on until 27 January 2013.
Victoria and Albert Museum, Cromwell Road, London SW7 2RL

This website uses cookies to improve your experience while you navigate through the website. Out of these, the cookies that are categorized as necessary are stored on your browser as they are essential for the working of basic functionalities of the website. We also use third-party cookies that help us analyze and understand how you use this website. These cookies will be stored in your browser only with your consent. You also have the option to opt-out of these cookies. But opting out of some of these cookies may affect your browsing experience.
Necessary Always Enabled
Necessary cookies are absolutely essential for the website to function properly. These cookies ensure basic functionalities and security features of the website, anonymously.
Functional
Functional cookies help to perform certain functionalities like sharing the content of the website on social media platforms, collect feedbacks, and other third-party features.
Performance
Performance cookies are used to understand and analyze the key performance indexes of the website which helps in delivering a better user experience for the visitors.
Analytics
Analytical cookies are used to understand how visitors interact with the website. These cookies help provide information on metrics the number of visitors, bounce rate, traffic source, etc.
Advertisement
Advertisement cookies are used to provide visitors with relevant ads and marketing campaigns. These cookies track visitors across websites and collect information to provide customized ads.
Others
Other uncategorized cookies are those that are being analyzed and have not been classified into a category as yet.
SAVE & ACCEPT
Total
10
Share
0
0
8
0
2
0